What if you could visualize the neuro-net of the internet. And not just visualize it, but apply time scales to it? This would open your eyes to understanding where possible channels of interaction are between different Time-zones. For example, how hard is it to for you  to consider that when you hire someone on Elance, possibly from a different continent, whether the workflow will fit around your daily work program. Here is the answer:

World map showing the 460 Million IP addresses that responded to ICMP ping requests or port scans from June and October 2012. Theses maps where generated in a high and a low geolocation resolution version, either with or without a legend and in aspect ratios of 16/9 and 4/3.

The animated overview of internet activity is striking. As night hours sweep over the world, everyone but those in the states radically change their behavior. Subject to so much interpretation, this visual data could be valuable in other ways for assessing online behaviorals of target markets.

The “nearby” feature on Twitter allows you to find tweets from people in your neighborhood, but how would all that activity look visualized on a colored map?

Fischer created maps for most major U.S. cities, including New York, Los Angeles, Chicago, and San Francisco, as well as European cities like London and Paris, and Tokyo and Jakarta in Asia. Something of immediate interest to internet marketers is the amount of uptake on mobile devices from Indonesia, and also the concentration of interaction towards coastal towns rather than mid-states.

Visualizing Science and Technology in Wikipedia | A Beautiful WWW 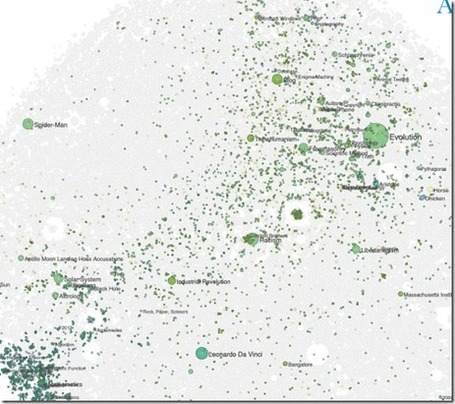 A large-scale visualization of all of the english Wikipedia, with coloring of science, math, and technology pages.

Todd is specifically looking at activity on Wikipedia surrounding science and technology related articles. If you’re interested in interpretations please leave comments for him.

I’ve pointed out that there are a plethora of visualization techniques to suit your research. Some of these are just simply beautiful, and hard to say whether they offer any real qualitative insight for your business. However they all have a value in broad strokes to connect our awareness to the wider network of the internet.

Do you have any suggestions on their interpretive value? I’d love to hear, especially if this helped your insight in some way to how you think about your online activities. Leave a comment or reach out to me on Google Plus. – Juliana